Unintentionally Fabulous Outcomes of our Renovation

Alright guys, I know I’ve been lacking on the blog posts lately but it’s just an insane time of year, right?!? We’ve been doing so much traveling and family activities and just enjoying the new house. Let me tell you it’s been so great. Anyways, I’ve been wanting to talk about this subject for a little bit because if you’re type A, like me, you need to hear this: ROLL WITH IT. Obviously, there is a time and place to pick your battles but some of the best things in life are unexpected. In this case, our bar back splash tile.

While we continue to finish each space and before I do major reveals of each, I thought I’d stick to the reno advice we learned along the way. Today, it’s that sometimes you just gotta roll with it. 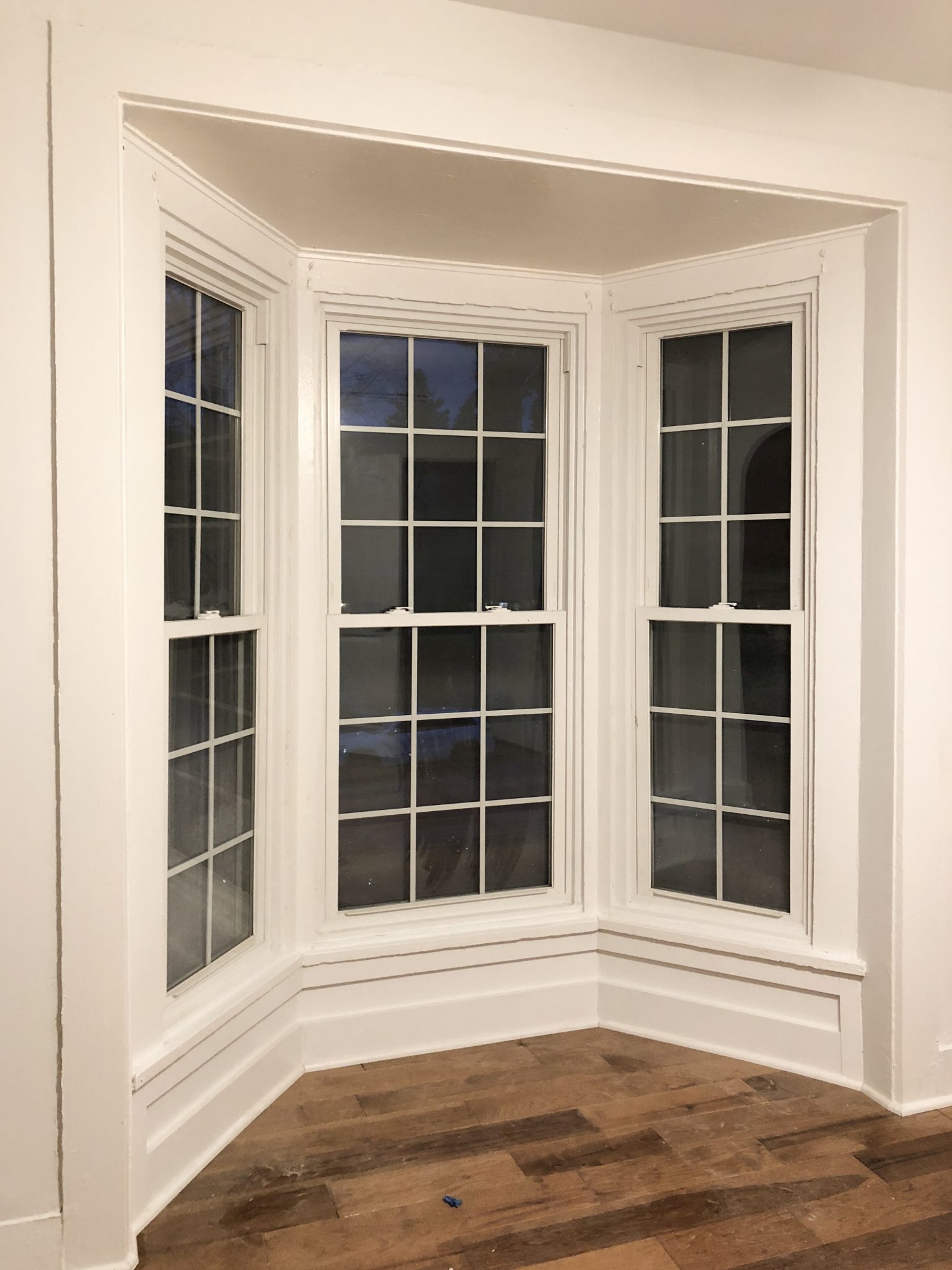 The first of the “unintentionally fabulous outcomes of our renovation” was the window style. We originally planned on keeping the bottom of the windows completely open (no mullions dividing the glass) and having only a single one going up on the top part of each one. Well, thankfully somewhere along the line, the wrong ones were ordered. Mullions it was. Now, I can’t imagine not having them. They give a sense of dimension to each room. It certainly looks better from the outside as well. 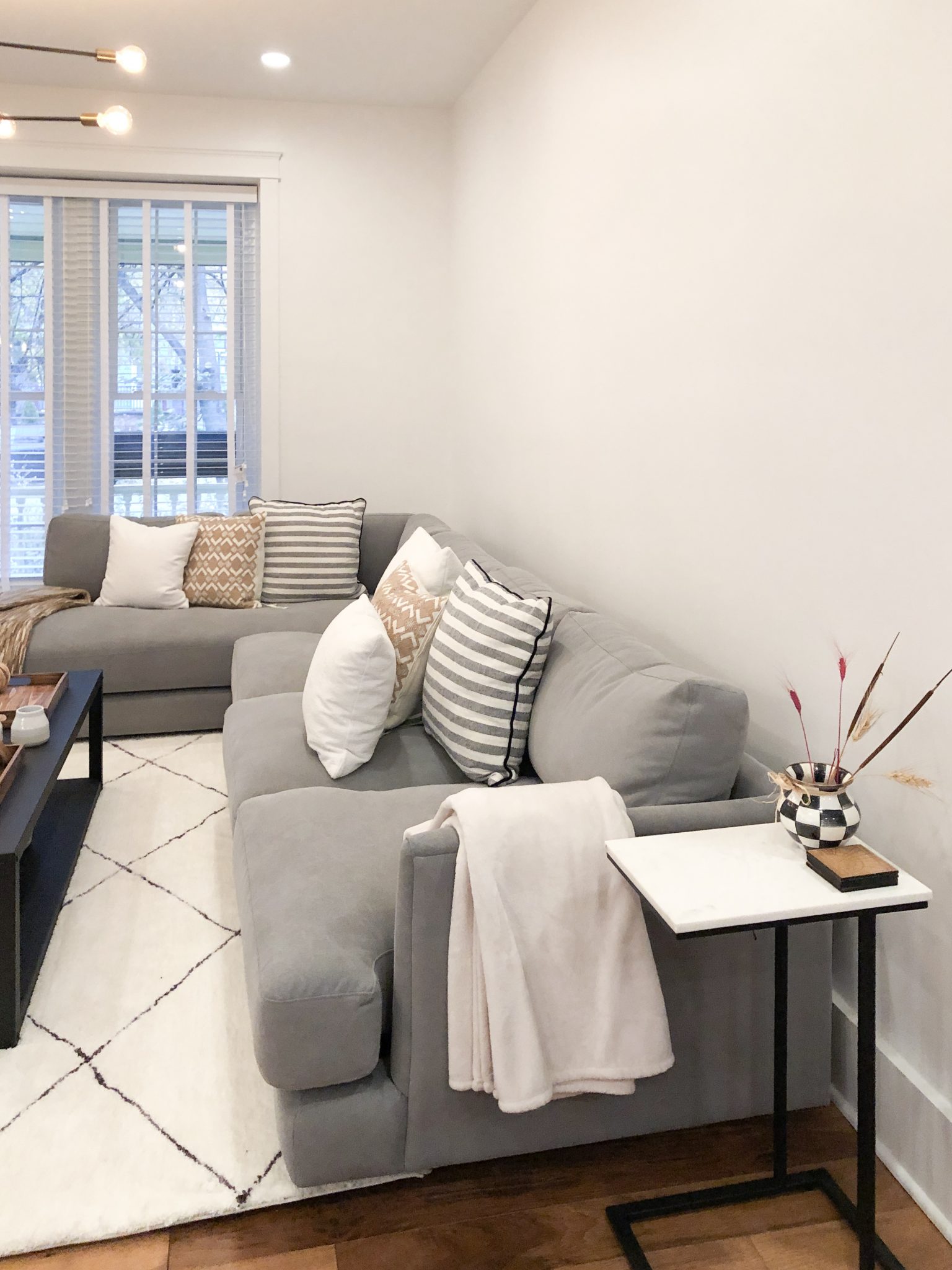 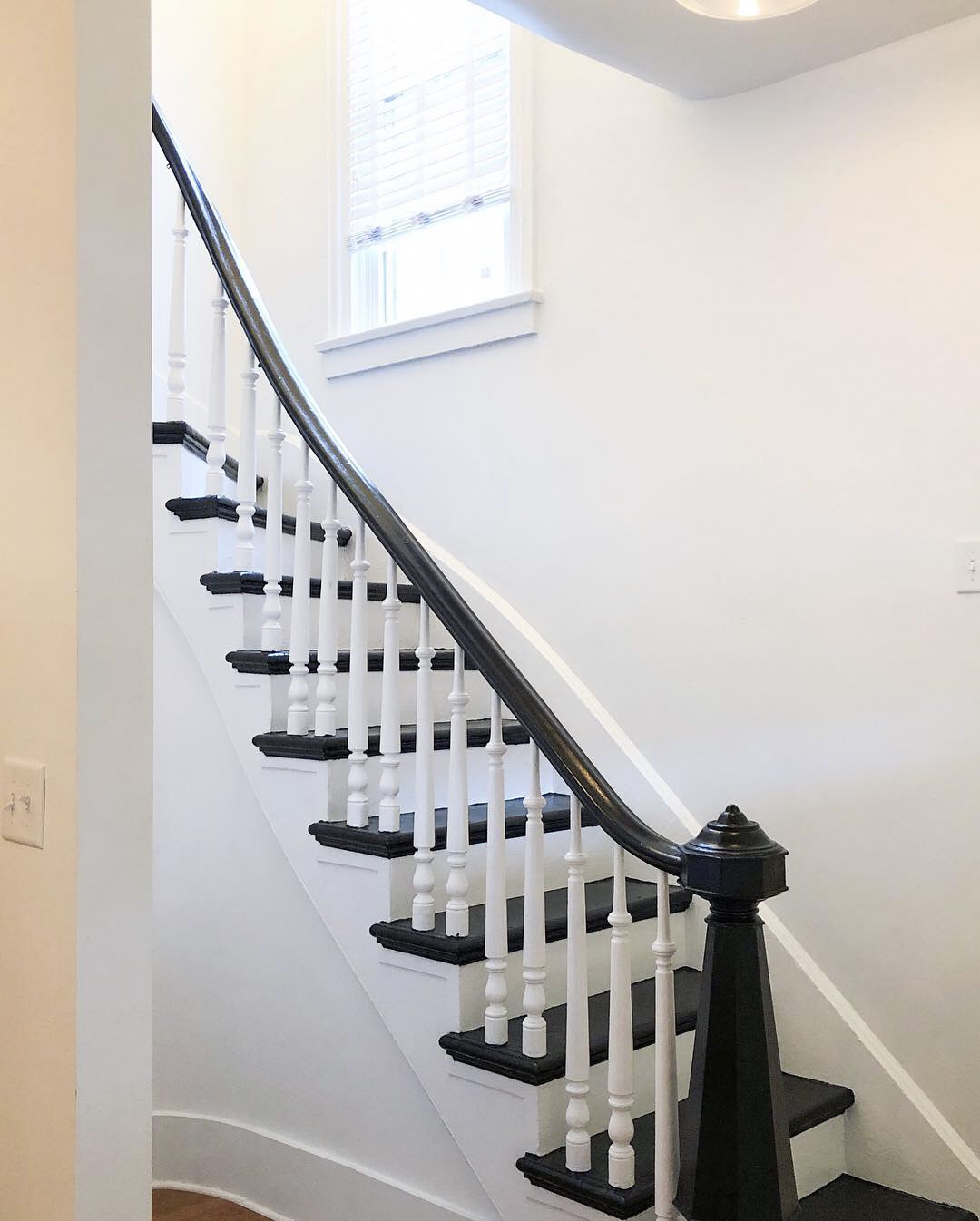 We all knew I wanted white walls right? Joe did too. However, he requested that I have some sort of off-white, one with contrast against the trim. His argument was that if we are putting in such nice trim, big white windows, and expensive baseboard, wouldn’t you want to be able to see them? I totally get it because yes, of course.

I went to give our contractor the wall color I really did think no matter what white I gave him, the white they use on those things will be just a tad brighter. Like they use some magic white paint or something for the trim and ceilings and whatnot. Well, let me tell you, it’s just like any other paint that I had to choose from. So when I gave them “Pure White” by Sherwin Williams, I really didn’t think they used “Pure White” by Sherwin Williams on the rest of the features.

From the top of the house to the bottom of the house was white. The same white. To answer your question, yes Joe was very mad. I felt bad too! Such a rookie mistake. Obviously, they just use the whitest white from the same line, not a magic special pure substance that would differ from, well, white. Duh, Olivia. I could live with it, I wanted white, I got white. Thankfully, it’s grown on Joe too. Our contractor still thinks we are crazy. Did I mention the “you need gloves to come into your house” joke they love so much? Also, our friends with kids are like, just you wait. Oh well, we love it now. It’s easily my favorite of the unintentionally fabulous outcomes of our renovation. It’s so easy to decorate, decide on furniture, it feels like a blank canvas. Every designer looooves a blank canvas! 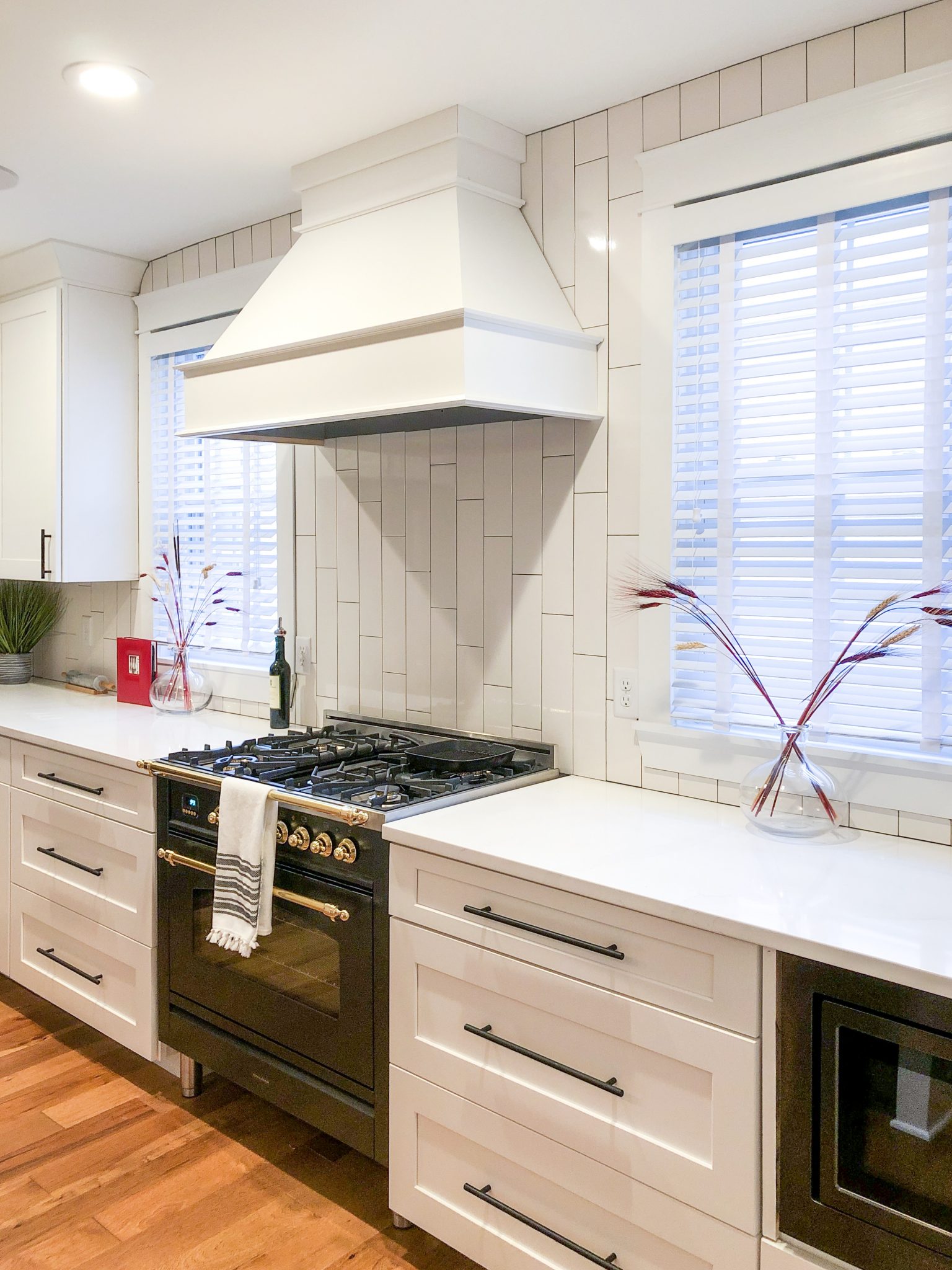 The latest “mistake” was more of a miscommunication. We knew we were doing a small subway tile behind the wet bar and an XL subway tile in the main kitchen area. The debate for weeks now has been the pattern they are each going to run.

We originally wanted to do herringbone with the large, normal brick-bond stacked for the small. Unfortunately, we realized herringbone was just not going to work. The distance between the countertop and the windows was too tiny and the amount of wall space just wouldn’t give the big pieces enough repeating pattern for it to make sense. So, we switched and went regularly stacked there and planned for herringbone by the wet bar.

Well, I had shown my sister and Joe the vertical herringbone look a few times. They both nixed it, I was fine with the nix, we moved on. Apparently, that is what our tile guy assumed herringbone was because though we went into it meaning the horizontal way, we got the vertical way. Well Y’all, I’m OBSESSED. I am so happy with it; it’s fun, modern but still clean.

Both of our downstairs tile installations can be considered unintentionally fabulous outcomes of our renovation.

In the main area of the kitchen, I thought the regularly stacked brick-bond of the larger subway tile was so farmhouse, overuse, and boring. I texted Joe with a picture of the vertical but he didn’t get it in time for it to be too late. It was a fiasco. He hated it, even I was not so happy with it. Now, I have never seen our vertical, stair-step, subway tile in a kitchen. Plus, it’s countertop to ceiling (also my fault and not planned). So, it’s super unique and with all of the appliances and hardware in place, it looks so cool and so modern. Phew.

So, there you have it. What do you think? Do you like our original plans better? Now that we get to look back on these unintentionally fabulous outcomes of our renovation, it’s kind of fun to have a story behind them. In the end, everything has worked out to be amazing. With any construction really, there are going to be instances when you just have to roll with it! 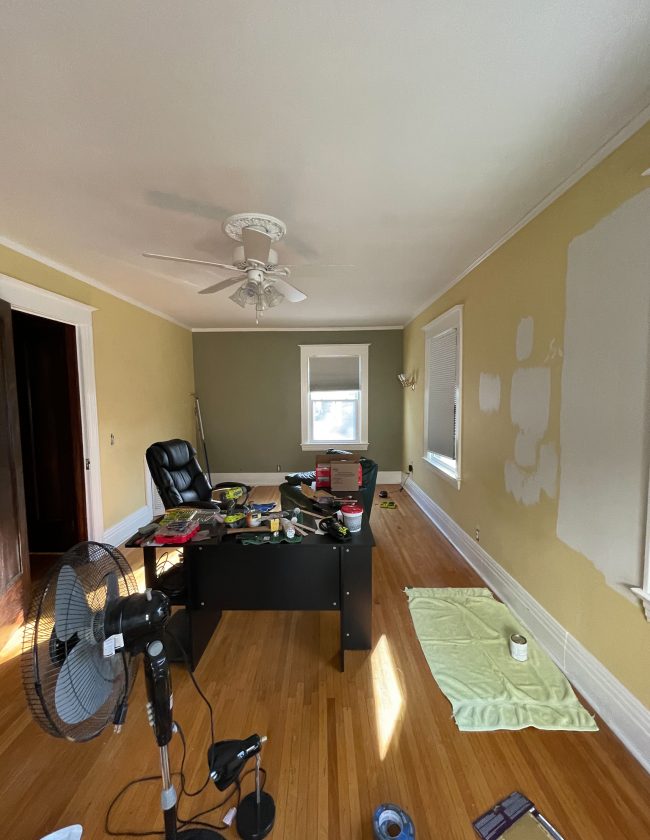